The Rum-Bar brand pays tribute to the traditional rum bars that are spread across the communities on the island of Jamaica. 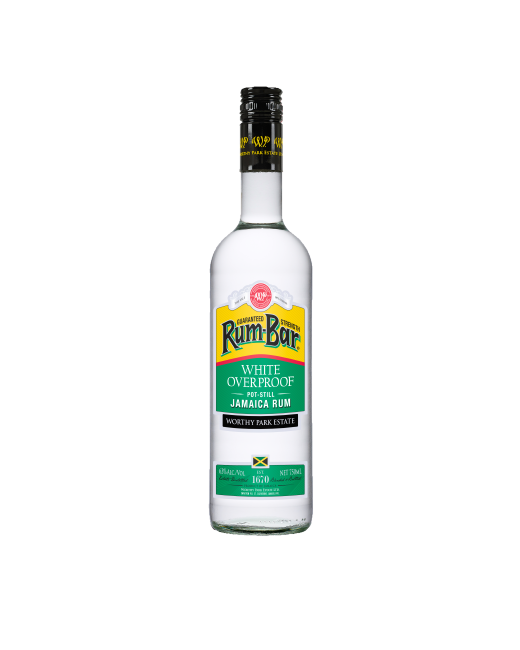 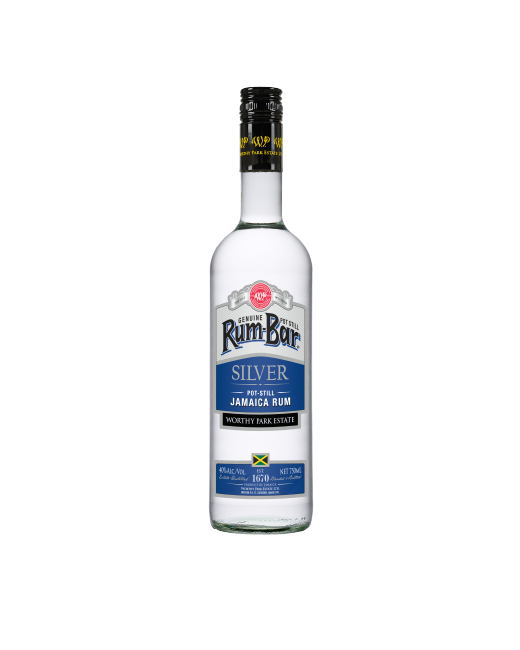 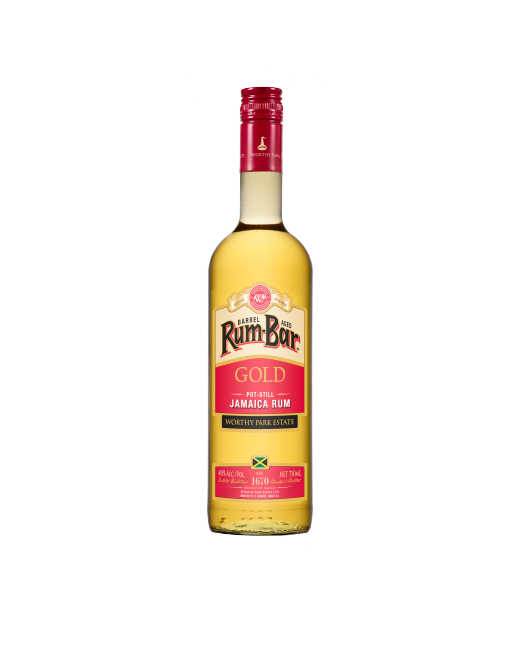 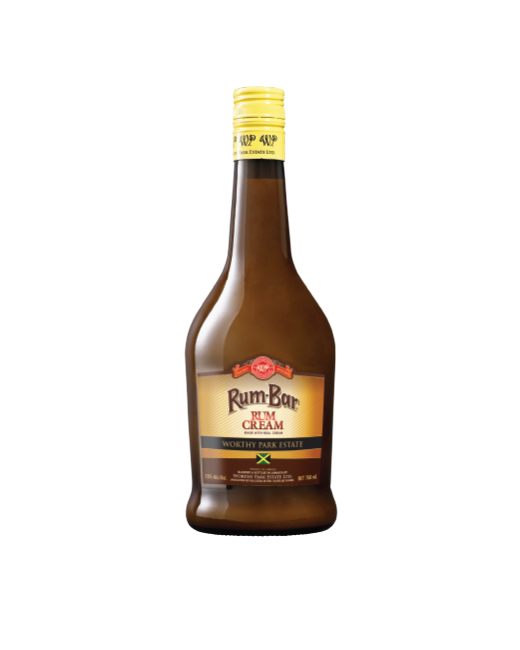 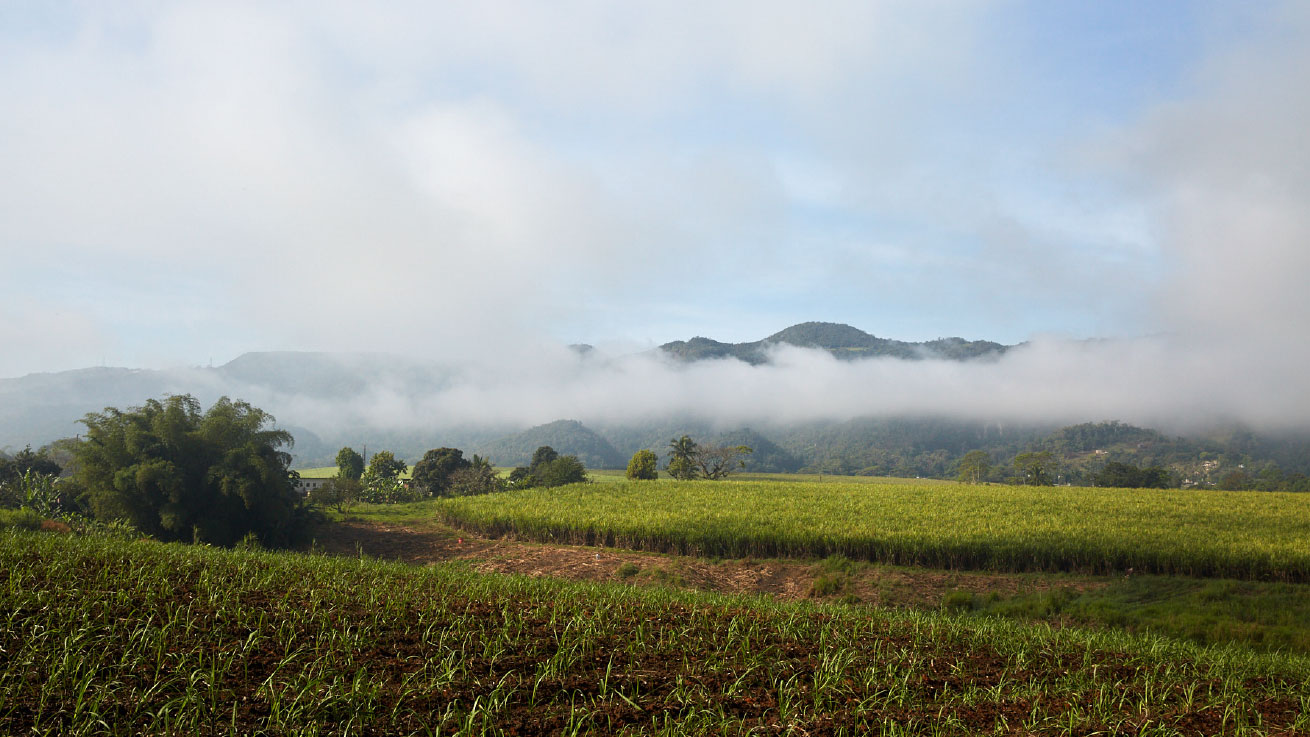 From cane field to bottle, Rum-Bar rums are made at the historic Worthy Park Estate, located in St. Catherine Parish, Jamaica. Sitting 1,200 feet above sea level, the estate encompasses more than 9,000 acres of land. 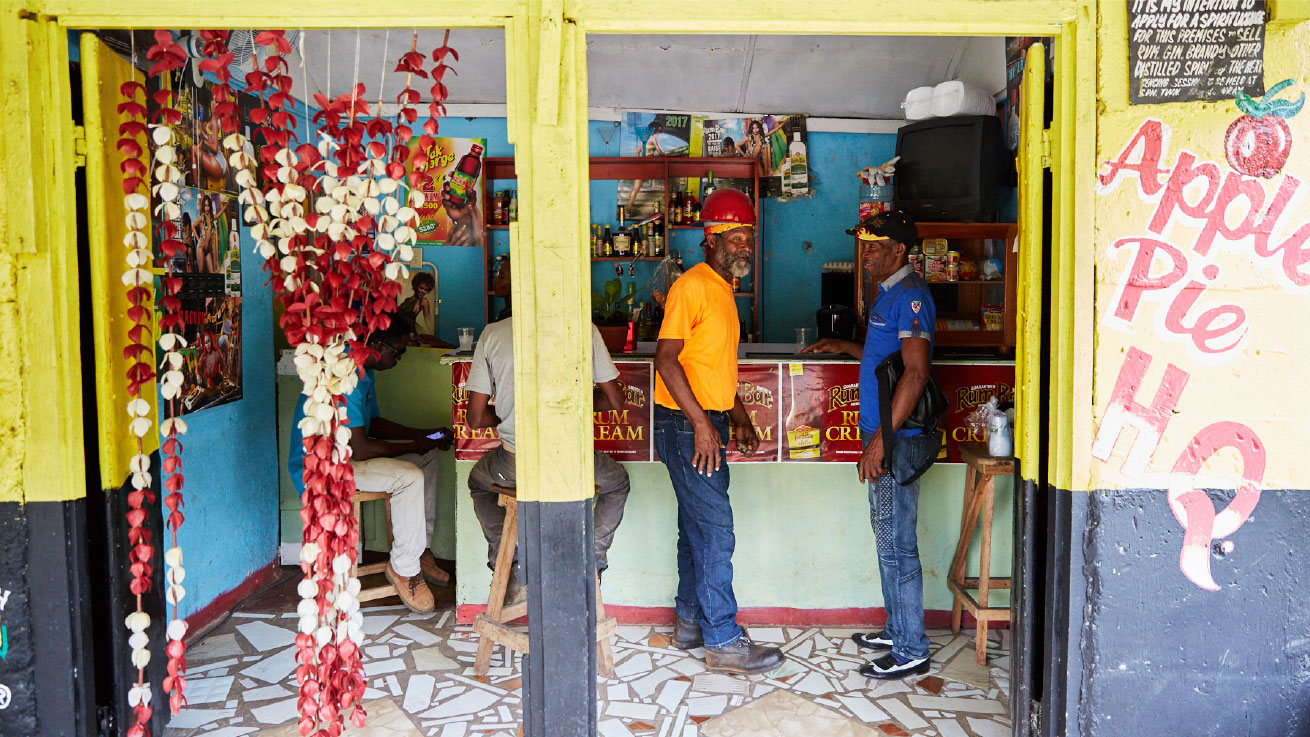 These tiny watering holes dotting the roadsides provide relief from the sun and a community gathering place. Most rum bars keep it simple, serving up white overproof rum with simple mixers, like fresh juice or soda. 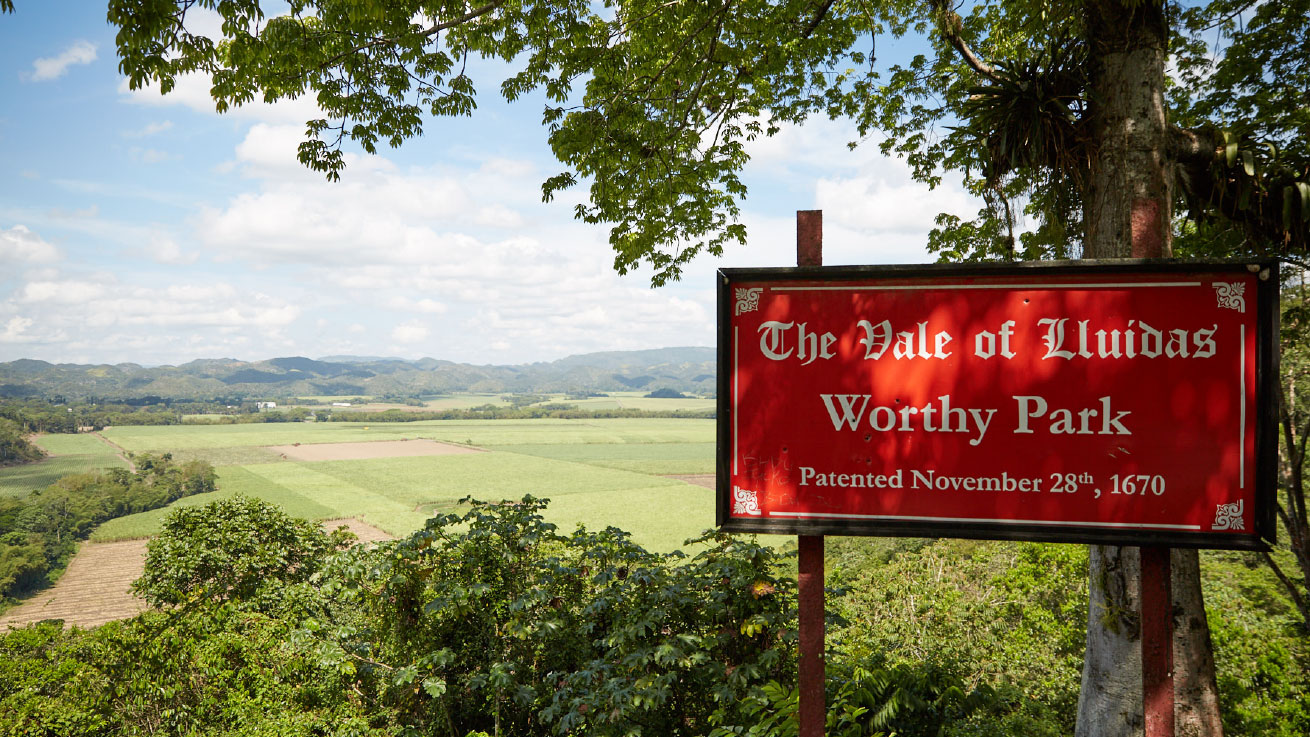 The Worthy Park Estate was patented in 1670 by English Lieutenant Francis Price, who served in Cromwell's army in its defeat of Spain to capture Jamaica for the British. Since that time, only four families have owned the historic Estate.

First patented by Francis Price, a lieutenant in the British army who served under Cromwell's when they captured Jamaica from Spanish control.

Commercial cultivation of sugar cane began in 1720 and has continued unabated to this day.

First ever record of rum production at Worthy Park was in 1741, predating any Jamaican distilleries still in operation.

Only four families have owned the estate. The Clarke family has owned and operated it since 1918.

In 2005, Worthy Park breathed new life into the estate by building a state-of-the art distillery to resume its tradition of rum production. 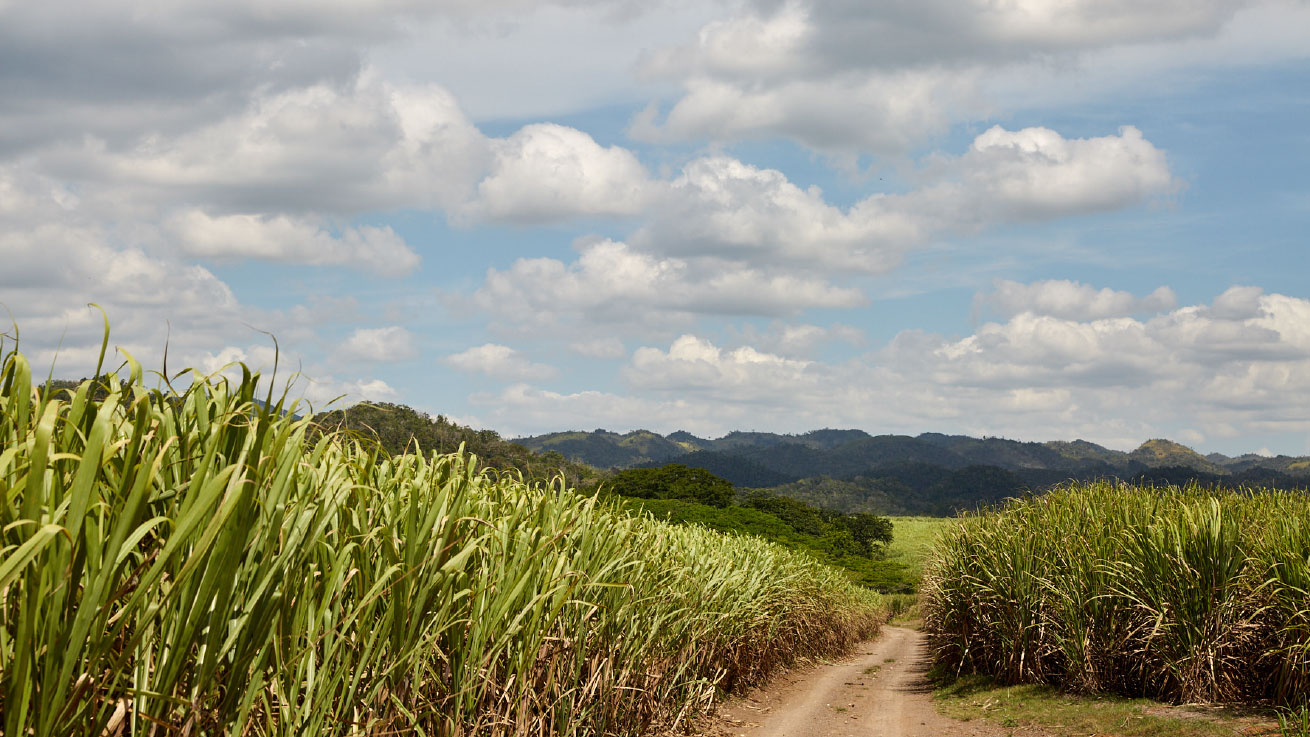 100% of the sugar cane used to create the molasses, is grown either on the Estate, or on one of three nearby properties leased for cane cultivation by Worthy Park. Thus, the aromas and flavors in our rums truly reflect the growing conditions and production processes at Worthy Park Estate.

Sugar cane cultivation is the backbone of rum production.

Most distilleries in the Caribbean have no way to track their molasses source.

From planting, to harvest, to refining, Worthy Park controls every aspect of sugar production on the Estate, meaning the end product is guaranteed to be 100% Jamaican.

Worthy Park's dedication to efficiency applies to all aspects of the business, including cane cultivation, sugar production, and rum production. Worthy Park has been rated the No. 1 sugar factory in the Caribbean for efficiency, every year since 1968.

This also means that, for each ton of cane harvested, Worthy Park yields the most sugar. 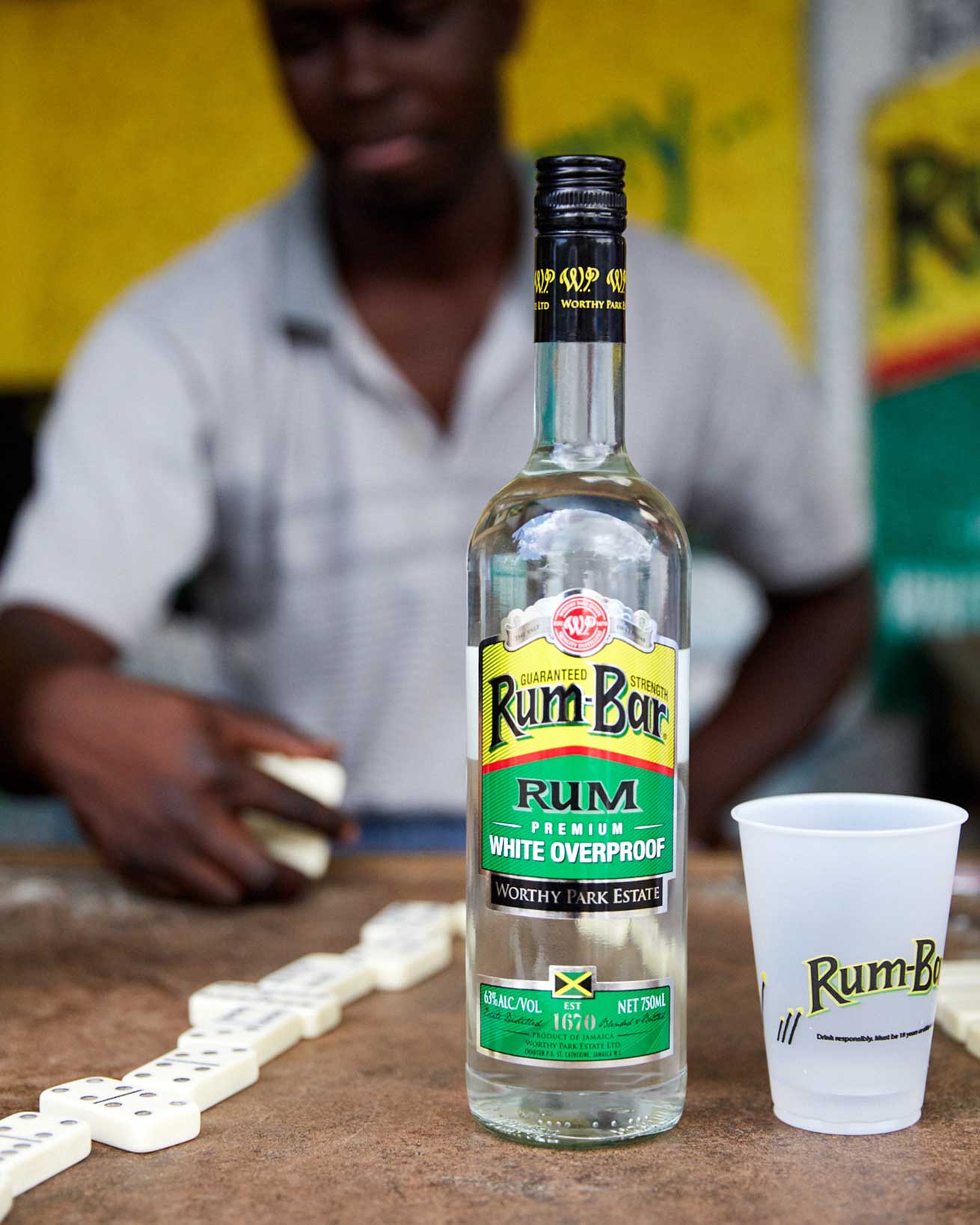 Rum-Bar is one of the most popular rum brands on the island of Jamaica.

White Overproof rum is the top selling style of rum in Jamaica.

Many local bars are "branded" with the Rum-Bar banner.

Gordon Clarke represents the 4th generation of the Clarke family, who have owned Worthy Park since 1918. In 2005, Gordon was the driving force behind the construction of the new Worthy Park distillery, which reclaimed the heritage of rum production on the estate that dates to 1741.

After spending his childhood visiting his family in Jamaica, Alex moved to the island permanently in 2005. He joined Worthy Park Estate in 2015 in order to expand the global footprint of Worthy Park rums. He has traveled the world preaching the gospel of Jamaica rum, becoming a respected authority and educator in the rum category.

With a minimum of four years in the barrel, Rum-Bar Gold is aged exclusively at the Worthy Park Estate, in the geographical center of Jamaica. The high humidity, warm days, and cool nights, result in a rapid aging process, allowing our rums to develop rich, deep flavor profiles at younger ages. Due to the tropical aging environment, we often lose 4-6% annually as the Angel's Share.

95% of our barrels are once-used, American White Oak, previously filled with American whiskey from Tennessee.

to perfection at a minimum of 4 years.

Rich, complex, and fruity, with no sugar added.

Perfect for sipping neat, or used as a base spirit to add depth to rum cocktails.

Jamaican rum is an essential component of tropical and tiki cocktails.

Adds punch and backbone to any cocktail.

Use as a base spirit on its own, or as a split base, to complement other spirits in the cocktail.

Rum-Bar Silver is ideal as a go-to standard that takes every cocktail up a notch in flavor.

Custom built by Forsyths in Scotland - the industry leader in pot-still manufacture.

Operates on a batch system with a 5-6 hour cycle.

Heated by an external source (i.e. steam), rather than coils inside the still.

Primer on the Double Retort Pot-Still

Wash is placed in pot-still

During pot distillation, we put a batch of fermented molasses wash into our Forsyths copper pot-still. We seal the pot and heat it using an external calandria. As the wash heats up, the alcohol in the liquid boils first (because alcohol boils at a lower temperature than water) and turns to vapor. The vapors are a mix of alcohol, congeners, and other compounds that provide flavor and aroma. The alcohol vapors rise up into the head of the still, then are drawn off through the goose neck, into the low-wine retort.

The vapors enter the low wine retort, mingling with and heating the alcoholic liquid inside. The liquid in the low-wine retort is approx. 30%, exiting at approximately 60% abv.

The process is repeated in the high-wine retort, heating the alcoholic vapors, separating them from remaining water, flowing into the condenser at 85-87% abv.

Finally, the alcoholic vapors are condensed at the last stage of distillation, with rum exiting the still at 85-87%.

Pot stills are almost always made of copper. Copper strips most of the sulfur from a distillate. Sulfur arises naturally in the fermentation process. Sulfur reacts with copper to form copper sulfate, which separates from the distillate, removing the sulfur aromas from the final product. It lends a sour taste to spirits, so it's best to remove it.

Pot-Still distillation is a hallmark of Jamaican Rum. Also called "batch" distillation, using a copper pot still allows more congeners and esters into the rum, resulting in a concentration of flavors. Many rum producers blend column still rums, which in many cases are lighter in body and more neutral in flavor, with smaller amounts of pot-still rum that bring the desired weight and flavor to the blended expression. Worthy Park, however, only uses pot still distillation, true to the Jamaican heritage.

"Continuous distillation" in traditional column stills and/or multi-column industrial stills, is common among Caribbean rum producers. There are various types of column still, but the process basically consists of the fermented molasses wash being fed into the top of a vertical column still containing plates that are spaced out. As the wash is heated in the column, it vaporizes, separating the more volatile alcoholic vapors from the less volatile water. The water, along with many of the flavorful congeners (ethyl, esters, etc.), condense and collect at the bottom of the still. Use of column stills often result in neutral rums with lighter body, though not always.

During the distillation process, chemical compounds called congeners (e.g. esters, tannins, methanol, fusel alcohols) evaporate along with the alcohol while heating in the still, mingling with the liquids, impacting the flavors in the rum. Pot-still distillation allows for higher concentration of congeners in the final spirit.

Esters are a specific type of congener that result in the round, fruity notes typical in many Jamaican rums. In rum production, the acidity of the fermented wash greatly impacts the ester levels. Rum producers often use fermentation techniques, such as temperature controls and specific yeast strains, to impact ester counts that, in turn, affect the flavor of the distillate. Aging in barrels can also affect the concentration of esters in the rum.

Worthy Park uses three different types of yeast, as well as controlled and uncontrolled temperatures during fermentation, to create five specific rum marks, each with a different ester count.

* These five marks are blended masterfully to create the Rum-Bar range.

More than ever, bartenders are looking for spirits that stand out in a cocktail, without the use of artificial coloring or flavor additives. According to the CARICOM Rum Standard, Jamaican Excise Act, and Jamaica Rum GI, caramel color and water are the only additives allowed in the production of Jamaican rum. True to these standards, Rum-Bar rums contain no added sugar or flavorings, and only minimal caramel in Rum-Bar Gold to maintain consistency across bottlings. 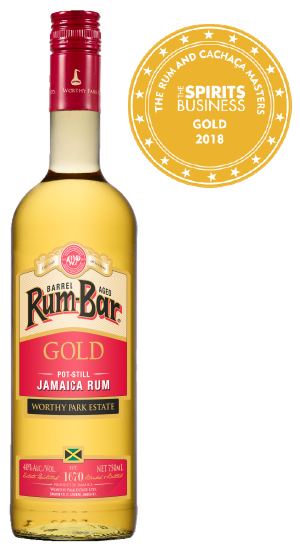 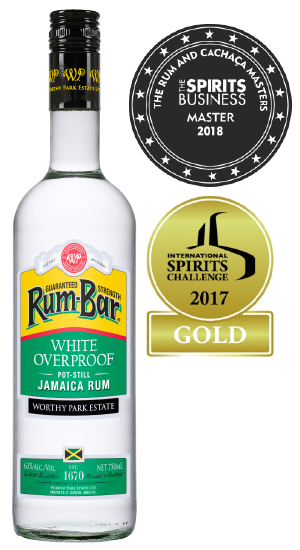 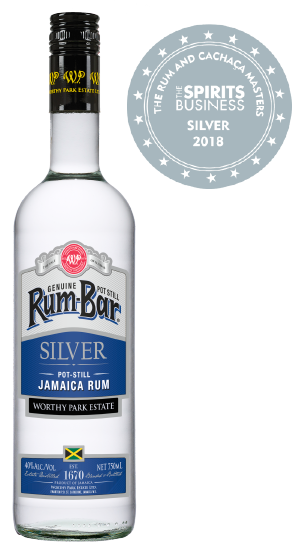 Rum-Bar offers bartenders the real flavor of Jamaican rum, striking a balance between Jamaican "funk" resulting from the use of pot-stills, and fruit-forward flavors that translate into amazing cocktails.

Tiki and Tropical on Trend

Perfect for the current trend toward tiki and tropical-style (i.e. citrus-forward) rum cocktails. With three different unique expressions, Rum-Bar offers the essential "tool kit" for base rums for every bar program. 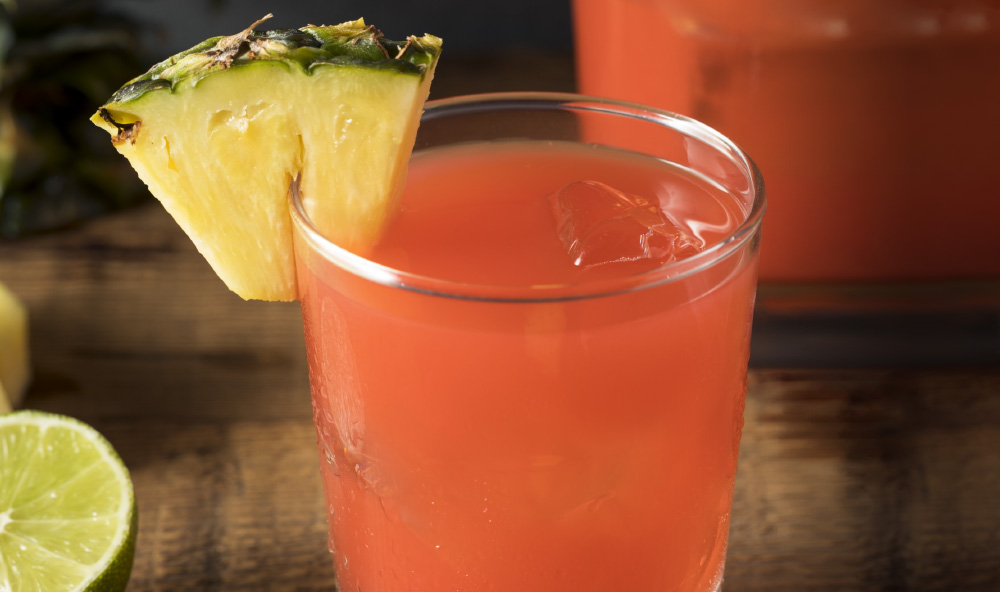 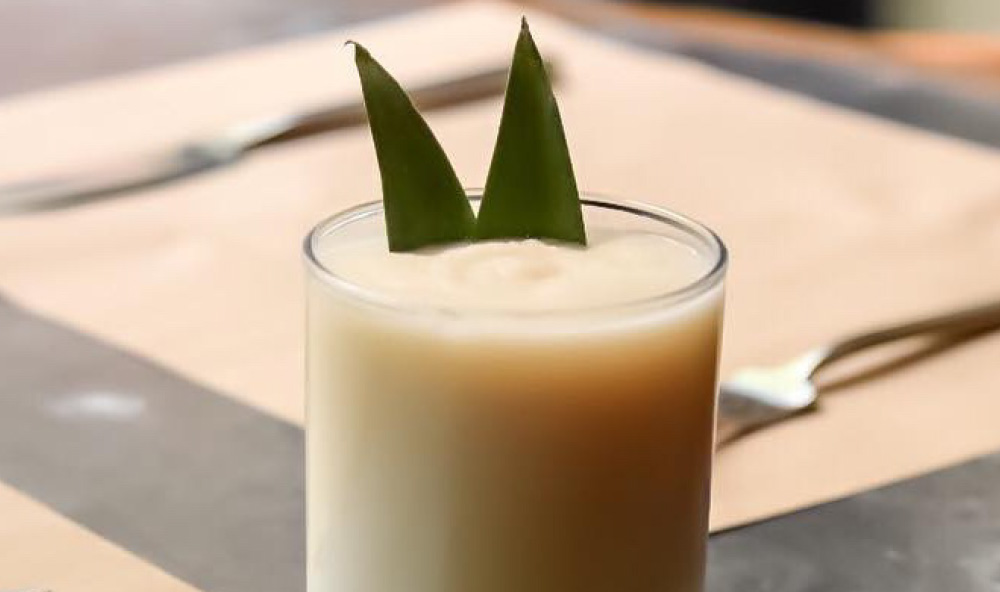 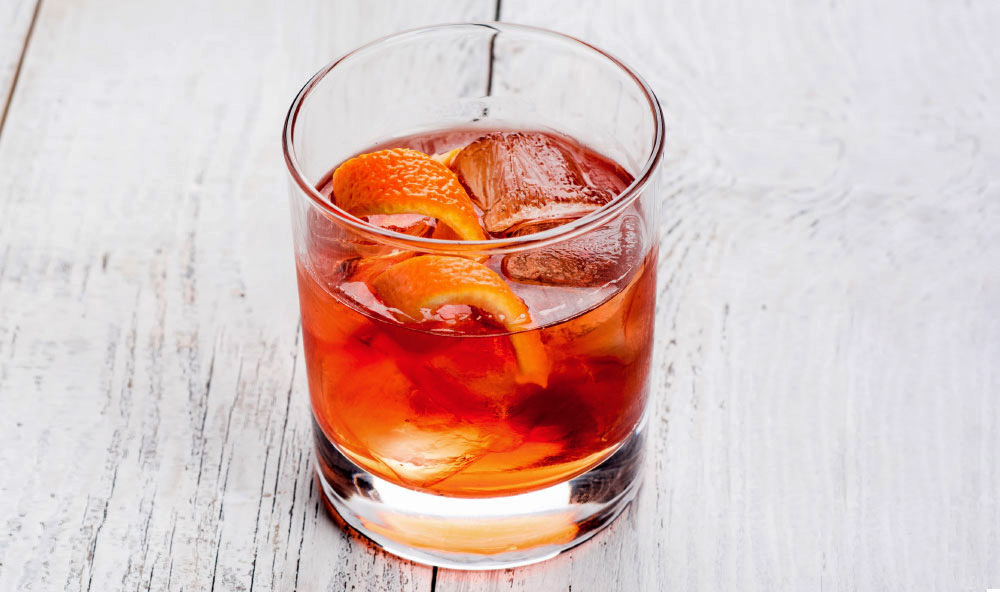 Are You of Legal Drinking Age?

You must be 21 or over to enter this site.

Sorry you Must be 21 or older