by Matt Belanger, bartender at Death & Co. in New York

Matt Belanger from Death & Co. New York, is known for his fun approach to making cocktails, often with a tropical vibe. In this riff on the classic daiquiri, he uses a combination of pot-still Jamaican rums - Gold and White Overproof - from Rum-Bar, produced at the historic Worthy Park Estate. With their distinctly full, banana aroma and flavor, the rums make an ideal pair for the Giffard Banane du Brésil, that lends the signature banana flavor. He balances the drink with the exact proportion of fresh squeezed lime juice. Et Voila... the perfect daiquiri is born. 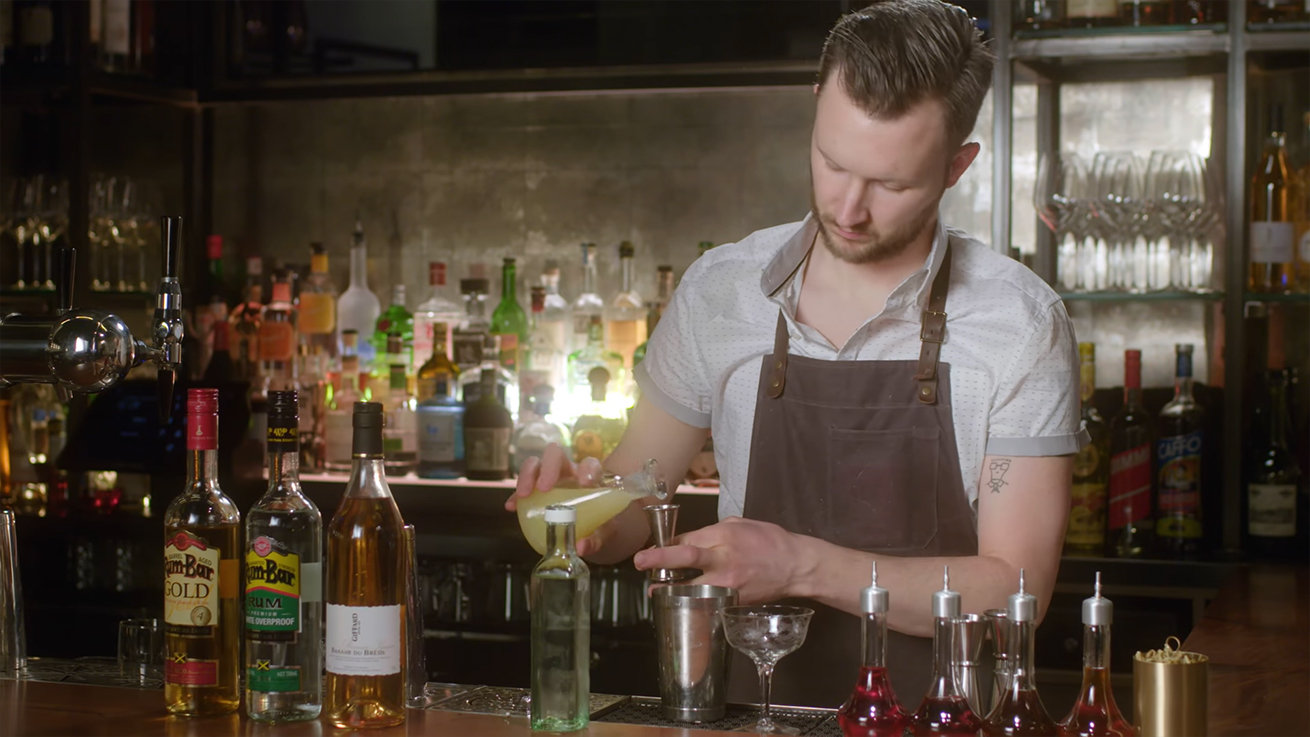 According to Charles H. Baker, author of 1939's The Gentleman's Companion, the legendary daiquiri was created in order to make palatable the combination of rum and water then commonly used to prevent malaria among sailors and the Royal Navy. The solution to add lime juice and sugar to the otherwise medicinal mixture originated with Harry E. Stout and Jennings Cox, who created the cocktail in 1898 in the village of Daiquiri, in Cuba. The daiquiri -- intensely loved by bartenders and cocktailians -- has seen its fair share of riffs and modifications, but no other flavor complements rum quite like banana.

Possibly no other cocktail is revered by bartenders quite like the daiquiri. Though the cocktail is known for its simplicity, the daiquiri is easy to ruin (often by newbie bartenders) by using the wrong proportions. Thus, the drink is notoriously ordered by bartenders as a litmus test for gauging the capability of a rookie or unknown bartender, just as often as it's ordered for its lack of fuss and drinkability.

Split the Base Rum

A daiquiri is simple, with the essential elements of rum, lime juice, sugar, and water (i.e. dilution of ice). To add a layer of complexity to an otherwise standard list of ingredients, bartenders all over the U.S. have started to experiment, by splitting the rum base into different styles of rum, often from different islands in the Caribbean, in order to reach a desired "blend" of flavors from the rum. In his version above, Matt Belanger from Death & Co. uses a four-year aged rum from Rum-Bar Jamaica at 40% abv along with the light addition of 1/4 oz. of Rum-Bar White Overproof Rum at 63% abv.

For more visit Back Bar Project